I’m sure you’ve all been wondering how I got on with my first attempt at Whole 30. No? Well I’m going to tell you anyway. I’ll be honest, I did very, very well for three weeks, and then I hit my third weekend and cracked. I had a glass of red wine. So, I guess that counts as a failed Whole 30 but a reasonable Whole 21.

In any case, I don’t feel too bad about it. The thing is, once I cracked the door open with the wine I never really got it shut again. So the wine led to the odd dark chocolate that I got with my Butlers coffee. And then I might have thrown some honey onto my coconut pancakes (although I did leave the honey out of the recipe, it still works). But in general I’ve still been eating really well and I’m very happy I did it.

Here’s what I learnt:
– If you’re trying to control your sugar cravings then you’ve got to go easy on the fruit. Better yet, avoid it altogether because, for me anyway, it tends to set me off on a sugar spiral where I just want more sweet things. That said, sometimes a bowl of berries as dessert does the job and you feel like you’ve had a treat. Just don’t do what I did and put balsamic vinegar on them. Yeugh. 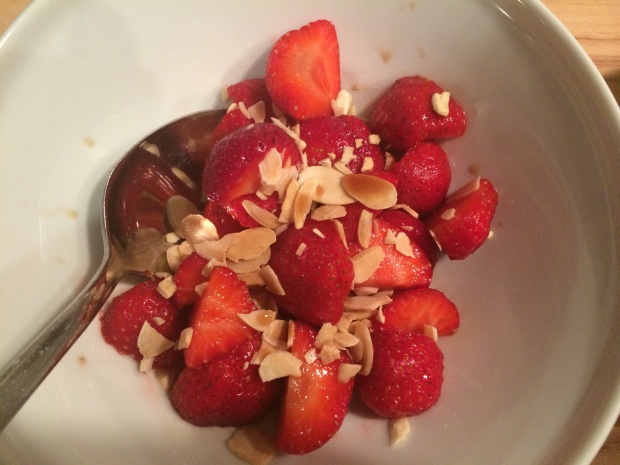 Oh sure, it looks pretty…

– To eat really well (and be paleo compatible) it’s almost impossible to eat out at restaurants. This is great for saving money but sometimes it’s unavoidable and you’re never sure what’s hidden in things. As a rule you might as well suspect that sugar and flour are in everything, because they tend to be. But it can make you feel like a bit of a killjoy, always ordering the salad or the omelette. Anyway, life goes on. What I did for the last few weeks was meet people at non-meal times and just ordered black coffees.

– I’m totally over dairy. In the last few days I’ve started including a bit of grated cheese in my omelette again and the odd splash of double cream in my coffee, but frankly I could take it or leave it. I still make huge batches of ghee once a month, not because it’s technically non-dairy, but because it’s a great fat to cook with. It has a high smoking point and it goes well with everything. Some things just don’t go well with coconut oil, plus it’s expensive, so it’s nice to have an alternative.

– I’m pretty impressed with myself that I didn’t drink for three weeks, and it’s no particular surprise that it’s the wine that got me in the end. I’m no heavy drinker by any standards, but when it gets to Friday night and I’ve made an awesome dinner like burgers in portobello mushroom “buns”, it just feels more festive to wash it down with some wine. I’m going on holiday next week and can only imagine the damage I’m going to inflict on my liver, so I’m feeling rather virtuous that I gave it a break for the guts of a month.

So that’s it. I reckon I’ll probably attempt Whole 30 again at some stage. While I was doing it I felt very smug indeed, and isn’t that what life’s about? No? Anyway. Next time I’ll try and steer clear of the wine. It’s all my husband’s fault for buying it anyway. Let’s blame him.